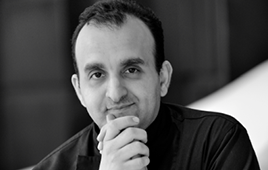 Born in 1973 in Algeria, Eddie very quickly asserts himself as the most talented patissier of his generation, showing a passion, an autority and a work capacity out of the ordonary.

He perfects his techniques near Christophe Felder, the pastry chef of the Crillon from 1996 to 1999. After a brief period at The Four Seasons Hôtel George V between 2000 and 2001, Eddie becomes the pastry chef of the Hôtel Ritz till August 2008. Since then, he works at the Gordon Ramsay restaurant at the Trianon in Versailles.

Eddie works as well as a teacher for different schools and as a consultant. He participates in the creation and improvement of new products and new ways of consumption.

A mythical career for a talented pastry maker! Eddie Benghanem’s pastry is refined, simple and gourmet. In this professional training, Eddie will pass on to you the keys and know-how that will allow you to make the classical desserts of the French pastry in real original and contemporary creations.

Breakfast and lunches are included